The Brotherhood is a first rate band whose players’ wide recognition is rooted in Richmond’s jazz continuum.

The most seasoned members, Dr. Weldon Hill and James ‘Saxsmo’ Gates, are educators who honed their skills gigging with artists of an earlier generation. The youngest member, drummer Billy Williams Jr., is a millennial. Band founder and bassist Mike Hawkins, who came of age in the ’90s, leads from the middle.

The upright bass is a large, unwieldy but yet subtle instrument. Its low, bottom-end sound is an essential part of the mix, yet people notoriously will talk through a bass solo in the live setting. Unlike the high, attention-demanding notes of a lead instrument, such as guitar or saxophone, low notes permeate the environment. In jazz, the bass defines the pulse and sets the harmonic context. Deep notes require deep understanding and a willingness to be the foundation.

Substantial and self-effacing, Hawkins is a quintessential bassist. Born in Alexandria, he was fascinated by the instrument as a child watching the electric bassists on “American Bandstand.” He was, initially, less drawn to jazz.

“My original goal was to become a Go-Go all-star,” Hawkins remembers, referring to the percussion-heavy funk genre that ruled the Washington, DC universe in the last decades of the 20th century. Hawkins put off college until his mid-20s. His professor at Virginia State University introduced him to the upright bass and tried to get him to listen to jazz. “My professor gave me a bunch of tapes,” Hawkins says. “I would erase them and put Go-Go stuff on.”

But by chance, a tape of keyboardist Herbie Hancock’s classic “Maiden Voyage” survived long enough for Hawkins to listen to it with new ears during the second semester of his sophomore year.

“It opened up a whole different world,” Hawkins recalls. “That was where my journey in jazz started. I almost got kicked out of school because I was always practicing, listening, and transcribing. I pretty much stopped going to class.”

He also started to frequent 1990s-era venues like Benjamin’s while learning to perform in Doc Branch’s long-running Friday night jam at Rick’s. The connections made on the local scene eventually led to playing with former Count Basie saxophonist Johnny Payton’s all-star Renaissance Band.

“I really didn’t deserve to be in that band, because I really wasn’t ready,” Hawkins admits. “The saddest thing about it is that you have all these great, great Richmond musicians like Dave Hoggard, Dave Williams and Tuscan Jasper, and there is nothing really documented about these people.”

Hawkins went to graduate school at Queens College, City University of New York, and studied with an elite crew of New York musicians, then the jazz center of the universe. Those connections led to his first regular high-profile gig, five years performing in the band of pianist Cyrus Chestnut. Still, Hawkins kept up his Richmond connections and came back in 2002 with an established reputation and an idea of who he wanted to play with.

“I used to see [James ‘Saxsmo’] Gates and Weldon Hill in a band called the East West Quartet at a little place called Woody’s on Grace Street,” Hawkins says. “I always thought that one day I would play with those guys. And when I came back, they took me under their wing and treated me as if I were one of their own.”

They were mentors as well as bandmates. In addition to performance careers, both are educators at Virginia State University. Continuing in the model of the older players who came before them, neither let Hawkins coast on his talent.

“He really challenged me to be my best, in a whole lot of different ways,” the bassist says. “It was sort of scary because I had to step out of myself and step up to a different level.”

For the fiery Gates, son of saxophonist James Gates Sr., there is no such thing as a local musician.

“I grew up in a house with a whole lot of older musicians, and they all hated to be called local,” Gates says. “I never heard about a local player in New York or in Boston when I was a student at Berklee [College of Music].”

Indeed, where you live does not reflect the quality of your playing; as anyone understands after seeing an opening Richmond band blow away the visiting headliners. If this was valid in the last century, it is even more true now, when the centralized business power of big city record companies has shattered into streaming bits and bytes.

But the jazz tradition has always been about live performance.

“That’s what the Brotherhood is about,” Gates explains. “What I am trying to play is pure and extremely honest. If we are going to play a blues, we are not going to whatever page in the ‘Real Book’ [a collection of scores for jazz standards.] That isn’t what they did back then, so that’s not what we are going to do now.”

If Gates is the fire of the band, Dr. Weldon Hill is the eloquent polish. The pianist shares some of the gravitas of Duke Ellington, whose sacred music was the subject of his doctoral thesis at Catholic University of America.

“He is a technical master through and through,” says Hawkins. “No matter what style of music, no matter what you ask of him, he knows exactly what to do, how to do it, and takes it even farther. From him, I learned that you must do what you do best, to the best of your ability, and do it differently from everybody else.”

Percussionist Billy Williams echoes that sentiment: “Weldon is the class and elegance of the band. He is super soulful, but present in a way that is informed with depth, intelligence, and class.” 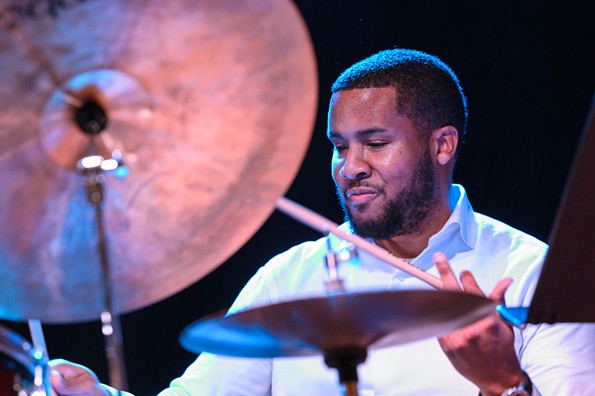 The band’s youngest player, Williams is increasingly the hardest one to schedule for live gigs.

“He is an amazing drummer, there is never a wasted note,” says Hawkins. “He knows exactly what the drums are supposed to do. And he does it with so much flair and precision. I’m obviously not the only one who sees this, because these days he is playing everywhere, all over the world. It’s tough for me to get him.”

It’s a self-created problem, and not a terrible one to have.

“Mike [Hawkins] is probably the most responsible for me having a national and international career,” Williams explains. “He really invested in me in terms of my playing. He saw the potential and really put a shine on it. The Brotherhood is the name of the band, but they really are like big brothers to me, in music and in life.”

The bond the drummer describes is a deep link in the continuous, living tradition known as jazz. It is not an unbroken chain. Many of the older generation have passed. Venues flare up and fade away into the city background. After Doc Branch’s venerable Friday night jam sessions at Emilios (temporarily) went dark, Hawkins picked up the torch. He hosts bi-weekly open gigs at Orbital Music Park, located at 2100 Tomlynn St. in Richmond.

From the outside, Orbital is a nondescript warehouse north of Broad Street and west of I-95. Inside it is a cozy, funky, creative oasis lit by Christmas lights and filled with colorful furniture, art, and instruments. Amazingly, on alternate Sundays at 6 p.m., musicians can sit in with some of the best players in the area. Hawkins is the center of this pocket universe, not hogging center stage, but always at the center of the music.

He seems to know that playing the long game isn’t burning brightest but keeping the flame alive.