In light of a bewildering array of ongoing problems facing our country and the world, the nonprofit and artist-run Artspace Gallery set out to plan its 2022 exhibition calendar in a way that would address these issues directly through artistic voices.

The result is a set of solo exhibitions featuring three artists who use their work to illustrate their concerns and the challenges facing our community, the country, and the planet. Opening Friday, Feb. 25, the gallery will showcase the work of three local artists: Elaine Rogers, Mona Dworkin and Carl Patow.

Rogers’ abstract paintings, “Thought Forms,” includes the foundation installation on the long entrance wall, with the visual, spiritual and social impact of her work anchoring the group. Rogers began the body of work in 2017 after Trump became president. “I was in a state of shock and panic because it seemed that an era of things not making sense had begun,” she recalls. “I had serious concerns about his leadership, his personality, and his honesty. And I couldn’t understand why anyone would follow someone so morally bankrupt.”

The first paintings Rogers did in response to a changing country were three small works on canvas. She soon realized that she needed to shift away from making large paintings that took a lot of time to complete and start working smaller as she opened up to the themes that would develop as well as experimentation. The environment and the climate crisis became ongoing concerns for her as she created paintings. “I think showing up to paint is a wonderful way to allow yourself to respond to all of these pressing issues,” Rogers explains. “I’ve always processed things that happen to me in my work, but these past four years there have been many issues in the world that just came right into my practice. To process information and learn of your own feelings in your painting response is vital to me.”

Mona Dworkin’s mixed media paintings reveal elements of fragmented portraits impacted by a racially divided country. The rich textural beauty of her paintings pulls the viewer into their complexities. As visual narratives on race, resilience and the fragility of human connection, the subject matter grew from Dworkin’s deep concerns about racism and misogyny. “Through my paintings, I give a voice to generations of people who’ve been abused by systematic racism,” Dworkin explains. “The title of my exhibition is ‘Resilience,’ a theme that reverberates throughout my work and life.”

The pandemic provided Dworkin the luxury of time and a groundswell of ideas, as well as a strong desire to illustrate injustice. “Inspiration comes from the daily barrage of news,” she says. “I’m grateful to have my art during the pandemic because it fulfills my need to express what I’m feeling and occupies my time in a positive way, creating and interpreting what many people are feeling.”

Carl Patow’s bright digital installations have realistic and satirical implications for climate change. As climate change continues to alter coastal environments, migratory birds are under constant threat of extension and his “And Then, There Were None” suggests that in the future, people will never see a living flamingo, only the kitschy plastic yard art variety. His artwork has always been grounded in important social issues such as community aspirations, discrimination, and the environment, although in the past, it was generated through one-on-one conversations in the community. With the pandemic, those conversations become nearly impossible to have safely and Patow pivoted to using photography to illuminate issues that build a vibrant, healthy society. 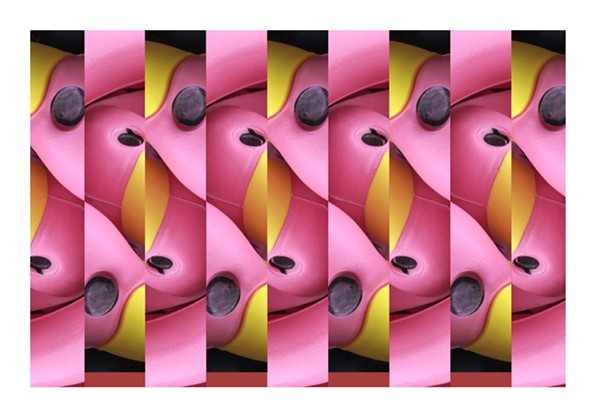 “Climate and environmental changes, both global and local, cannot be ignored. Weather and seasons have become irregular, with wildfire and floods now commonplace,” he explains. “Locally, we’re seeing ghost forests of dead trees replacing marshland along the Chesapeake as saltwater rises.” His photographs of plastic flamingos suggest that climate change is endangering wildlife, including those who live at water’s edge. “Plastic flamingos, who actually outnumber living flamingoes, will always be with us.”
Art educator and chair of the exhibition committee Buddy Terrell sees the new exhibitions as part of a continuum, stressing that there’s never been a time when social conscience has not been an important part of artistic creations.

“That said, the impact of blatant political lies and social media used to manipulate the masses for power is palpable,” he says. “We’re still in the midst of a worldwide epidemic, racial injustice, sexual emancipation, human rights, climate change and other major social issues. The impact of Picasso’s ‘Guernica’ is still as important today as it was when he created it in 1937 because it has a powerful visceral impact on social injustice presented with amazing visual aesthetics.”

"The Park at RVA" grand opening

All The World’s A Stage | Theater | Style Weekly

She has over 50 Christmas trees