Deejay Gray, co-artistic director of The Conciliation Lab, landed in Richmond just over 10 years ago with a craving for community. So he took it upon himself to learn as much about the theater scene here as possible and quickly discovered that some productions were legendary among the local arts cognoscenti.

“A few shows that people always talked about were ‘Who’s Afraid of Virginia Woolf’ at Firehouse in 2010, ‘Quilters’ at Theatre IV in 1986, and ‘How I Learned to Drive’ directed by Keri Wormald in 1998,” Gray recalls.

“Drive,” a story about a complicated and ultimately abusive relationship between a young woman nicknamed Li’l Bit and her uncle, earned playwright Paula Vogel a Pulitzer Prize in 1998 by presenting a deeply troubling subject in a way that manages to be poignant, insightful and surprisingly funny. When a hole opened up in The Conciliation Lab (TCL) schedule this spring, Gray realized “Drive” was the perfect choice to fill it.

Not only will TCL stage “Drive,” it will welcome back key personnel from the 1998 production for a post-show event on March 20. “I think it’ll be thrilling to hear what conversations were happening in the lobby back then; so much has happened since 1998,” says Gray. “The ongoing relevance of this show is a major testament to the power of storytelling and how stories evolve over time based on our perceptions of them.”

Gray isn’t the only producer with this bright idea: TCL’s production will open a few weeks before a production premieres on Broadway featuring the stars who originated the lead roles, Mary-Louise Parker and David Morse. While the show’s memory play structure enables actors of any age to play the roles, the actress who portrayed Li’l Bit in the first Richmond production, Jill Bari Steinberg, says she wouldn’t have wanted to participate in a revival.


“I don’t know if I could dive back into that again,” she laughs. “The way TCL is doing it, with a brand new cast, is the perfect way.” Steinberg has been a mainstay on local stages since her Richmond debut in 1991. She was named one of Style’s “Top 40 Under 40” fifteen years ago and starred in “Vincent River” at Richmond Triangle Players just last fall.

Though already a veteran in 1998, Steinberg says “Drive” was a landmark for her personally. “The character was the closest I’d played to me as a person,” she says. “I grew up being very uncomfortable in my own body and being bullied. For ‘Drive,’ I had to go to darker places than I had ever gone before.”

Steinberg believes that the deeper understanding of abuse today will make the story even more resonant: “We know so much more about psychological abuse and where fault lies. We didn’t have the same language then.” She credits a supportive cast and director as being essential in bringing such highly-charged material to the stage. “Keri brought together a group of caring and smart people and we knew we were going to be there for each other,” she says. 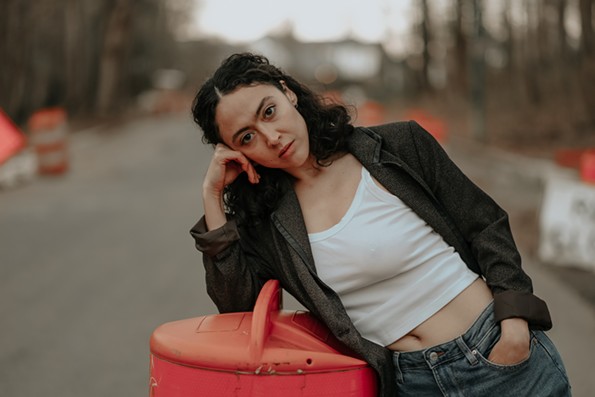 The director of the current production, Chelsea Burke, is very much aware of her responsibility in supporting her cast. “I think one of my strengths as a director is to create an ensemble that trusts each other and then to gracefully and carefully guide them through material that is difficult,” she says.

Even so, she has brought on additional help, employing intimacy director Stephanie “Tippi” Hart to assist with the production. “It’s almost like having a doula at a birth,” she says. “We could do this without one but emotionally we’re all better taken care of with her help. We’ve spent a lot of time reinforcing that what happens on stage is choreography. A lot of emotions come up because of the actions characters do, or that are done to them, and we have to allow the actors to leave those emotions at the theater.”

Juliana Caycedo steps into the role of Li’l Bit for TCL. The actress has tackled rough material before, playing the title role in the racial identity play “An Octoroon” for TheatreLAB in 2019, but feels like she landed this role at just the right time. “Any earlier in my career, I’m not sure I would have been ready,” she says. “I’m turning 30 this summer and I’ve been reflecting back on my teens and twenties. It’s been much more productive than trying to unpack things as they were going on.”

Caycedo knew “Drive” had been staged in Richmond before but only after getting the part did she hear how iconic it was to some. “I was already feeling a little bit nervous, then I was in a conversation talking about the 1998 run and how memorable it was,” she says. “When you hear that, you think, ‘oh, I really don’t want to mess it up.’”

Steinberg says folks in the current production shouldn’t feel nervous about living up to some arbitrary standard. “To me, it’s like listening to different covers of a song you really love,” she says. “It’s fascinating to hear how someone else interprets it.”

“How I Learned to Drive” opens at The Conciliation Lab this Friday, March 11th. There will be a special post-show event featuring artists from the 1998 production after the Sunday, March 20th matinee.

Another Awkward Interview – Bill Gates Grilled on Epstein Admits, ‘I Shouldn’t Have Had Dinners with Him’ – NewsWars

Fire leaves Virginia man with burns on over 80% of his body: ‘Keep him in your prayers’

Monday Live Show: All The World’s Conflicts Are Converging to a Major Revelation

What you need to know about severe thunderstorms