Rex Richardson’s Symphony Pops concert this weekend is a rare chance to see the RVA-based trumpet virtuoso the way the rest of the world typically sees him: As a soloist fronting an orchestral ensemble. His global reputation makes him a lighthouse talent for the VCU School of the Arts, where for the past two decades he’s been professor of trumpet and jazz studies.

It’s been a long time coming. Richardson’s last symphony concert here was in 2014. This one originally was scheduled for Feb. 27, 2020, but COVID would have required that the orchestra be downsized. “That didn’t fit my vision, so we asked that it be postponed,” Richardson recalls. It got pushed to April of this year.

Pollard was well on the way to wide recognition as an orchestral composer/arranger by the time he played guitar on Richardson’s 2014 jazz record “Blue Shift.” His cinematic score for “It is You,” the astounding closer of Natalie Prass’ debut album, was a brilliant arrival. His ability to create sonic landscapes has enriched over 30 other releases from artists like the Waterboys, Foxygen, Helado Negro, Matthew E. White and Bedouine. His debut as a leader, “Antiphone,” demonstrated a mature facility with modern chamber music.

After his record with all this incredible string writing came out, [Pollard] “offered to write a piece for me,” Richardson says. “Thankfully, he was serious.”

This new concerto promises to be one of the highlights of the program.

“The music is about static structures juxtaposed against changing ones,” Pollard explains. “With the trumpet as the omnipotent voice that understands how they work together.”

Another highlight is a new concerto written by Dana Wilson, now retired from Ithaca College of Music where Richardson taught in his pre-VCU days. They’ve worked together multiple times, from solo works to the genre-bending concerto that appeared on Richardson’s “Magnum Opus [Summit].”

Wilson explains that writing for Richardson has such musicality and dexterity that is truly a pleasure to write for him. “Writing for trumpet can be tricky because [for most players] there are specific, limiting idiomatic considerations,” she says. “With Rex, you just write the music that you want to write, and he plays it. Most players can play quite high, but they don’t have the control that he has, or the ability to jump from register to register. You don’t need to make a piece athletic just because you can, but it can add to the expressivity if you have a wider palette and a wider range. He brings such a beautiful intense array of colors” 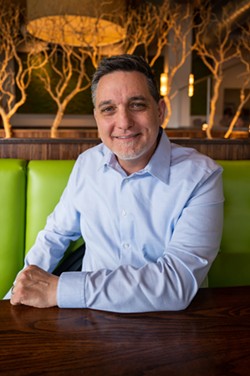 Wilson’s new concerto also had a difficult path to performance in the COVID era.

“The debut was cancelled several times,” Richardson says. “Once at VCU and three times with the Tokyo Wind Symphony Orchestra. As far as I know, this will be the world premiere.”

Being a Pops concert, the program is not all adventurous new sonic cuisine. There is a sizable helping of classical orchestra-enhanced jazz. People can get their vitamins with the concertos, but they will also have the comfort food of the Ellington arrangements. “I’m sure we’ll do ‘Caravan’,” Richardson notes. “A rip-down the walls version.”

This section of the program will feature guest artist, famed saxophonist- and VCU alum- Steve Wilson, along with an excellent area band of pianist Russel Wilson, bassist Michael Hawkins, and drummer Kofi Shepsu.

Even the contemporary compositions are designed to be accessible to the general public.

“It’s not bleeps and bloops,” says Pollard. “I don’t especially like concert music that defies you to like it. I think people really get music, but they like to know where they are. I know a lot about music, but [with some modern music] I can be lost. I don’t like that feeling.”

On a long-deferred night of hometown performances from global talents, listeners will know exactly where they are.

How We Can Take Back America

Have you seen him? Richmond boy missing for 32 years