Though traditional Tibetan art was the focus of the Virginia Museum of Fine Arts’ exhibit “Awaken: A Tibetan Buddhist Journey Toward Enlightenment” three years ago, Tsherin Sherpa’s modern take on Buddhist deities — colorfully mashing up skulls, stray body parts and gods — was the obvious fan favorite.

“One [visitor] after another was just blown away,” recalls John Henry Rice, the VMFA’s E. Rhodes and Leona B. Carpenter Curator of South Asian and Islamic Art. “It was seeing the sort of excitement that his work created in other people that got me thinking we should do a show just of this guy.”

That show is now a reality: “Tsherin Sherpa: Spirits” opened in February at the VMFA’s Evans Court Gallery. “Spirits,” which follows Sherpa’s career from 2009 to the present, is his first solo museum exhibition, catching him as his star is rapidly rising in the art world.

Ethnically Tibetan, Sherpa grew up in Nepal and lived in California for 20 years before returning to Tibet. In his work, Sherpa recalls stories his grandmother told of local deities who inhabited Tibet and imagines what would happen if those spirits were scattered across the world as people in the Tibetan diaspora have. Would they retain their identities and superpowers? Would they adapt to new cultures and ways of life? What of these deities’ children, born in other countries without first-hand knowledge of their homeland?


In “Staying Alive (Too Sexy to Die),” a spirit poses in underwear with a hand in the air, referencing John Travolta in “Saturday Night Fever.” In “Tara Gaga,” a female deity imitates Lady Gaga’s appearance at the 2013 MTV Video Music Awards with outstretched arms and a mermaid-inspired bikini. Sherpa’s fiberglass sculpture “Skippers (Kneedeep)” portrays a colorful deity in golden underwear blowing bubble gum.

Bridging the sacred and the secular, the ancient and the modern, the humorous and the serious, Sherpa’s work puts the cultures that comprise him in a blender set to liquify. 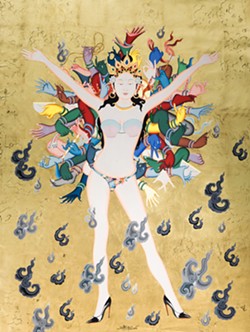 Central to Sherpa’s work is his relationship with Tibet, a region in East Asia that takes up most of the Tibetan Plateau, the highest and largest plateau on Earth. The Tibetan diaspora began in 1959 when the 14th Dalai Lama and his government fled during an uprising against Chinese rule. Today, an estimated 150,000 Tibetans live in exile.

Sherpa’s work often features a line of dripping paint that serves as a metaphor for the disintegration of traditional Tibetan culture. “It’s like their distinctive cultural identity is dripping away,” says Rice, who curated the exhibit.

Sherpa’s career began in Kathmandu, where he learned traditional Tibetan artistry from his father Urgen Dorje, a recognized master. After moving to California in the late 1990s, Sherpa found work doing traditional Buddhist paintings. He began experimenting in 2003 when Jamba Juice commissioned him to create an advertising campaign that incorporated juice and fruit into Tibetan imagery. Sherpa transitioned to his current mode of artistry around 2008.

“He never really wanted to do [traditional painting] for the rest of his life. He always wanted to explore other things,” Rice says. “He leverages all of his skills and a lot of the iconography from his traditional training, but he sort of goes in a distinctly contemporary direction.”

Sherpa eventually connected with a contemporary art dealer in London and began selling work to collectors. Shortly after the devastating earthquake that hit Nepal in 2015, Sherpa began returning home for extended trips and collaborating with local artists, including metal workers and rug makers. In 2018, he moved to Nepal. Since then, Sherpa’s work has been empowered with the swirling energy of the protector.

“It’s in this period, with these newly empowered spirits that they’re also becoming more and more diverse and individualized,” Rice says.

While Sherpa’s work deals with loss, it also features images of courage, defiance and struggle catalyzed by political tensions in Tibet. Early works depict spirits in a crouched position; later ones show them standing and fighting back, as well as embracing western pop culture and political references.

In “Eight Spirits,” eight deities are placed next to each other in reference to Andy Warhol’s “Eight Elvises.” In some works, spirits wear polka dot underwear as an allusion to English artist Damien Hirst; “Shambala,” which depicts a deity posing for a mug shot, reflects the rise in political imprisonments that have taken place since the 2008 Tibetan demonstrations against the Chinese government’s treatment and persecution of Tibetans.

Midway through “Spirits” is “Wish-Fulfilling Tree,” a participatory piece that Sherpa made with Nepalese metalsmiths that elaborates on a Tibetan Buddhist offering mandala. At its original installation, the mandala was filled with Nepalese bank notes signed by earthquake survivors. At another installation, viewers were allowed to toss coins into the piece. At the VMFA, patrons can fill out pieces of paper with wishes that will be placed inside the piece once a month. Underneath the mandala, local rubble is always incorporated into the piece; the VMFA installation includes material from the Robert E. Lee Monument, as well as detritus from construction at the VMFA.

Next month, Sherpa’s work will be presented at the Venice Biennale, one of the world’s most prestigious art exhibitions.

“If you’re a contemporary artist, that’s where you want to be, so that’s a huge deal for him,” says Rice. “He’s on the cusp of getting really well known. That’s why we’re so lucky to be able to do this.”

For someone “on the verge of being a superstar artist,” Rice says Sherpa is modest: “He’s very mellow and he’s got this great smile, and he’s a humble, nice, normal person. I don’t know if I’ll ever be able to work with another living artist.”

The final piece of the VMFA exhibit is “Himalayan Spirits,” a painting with life-sized figures that’s Sherpa’s largest work to date.

“In this final work, he wanted to make it clear that the spirits weren’t just about him, that they were about us,” he says.

“Himalayan Spirits” was partially inspired by the 12 signs of the zodiac. The piece has 11 figures in it; the twelfth is either the artist or the viewer, drawing them into the painting.

“It’s kind of the summation of the story, but it’s also this next chapter,” Rice says. “He’s on the verge of blowing up. After this show, and after Venice, a lot more people will recognize his name than did before. Who knows where it goes from here?”

The Chinese Communist Party Is Creating a Crackdown Economy

Marine says goodbye to the dog that saved his life

Jackson Ward homeowner told to remove mural from side of house