The first weekend there was a line snaking through the alley.

“We knew people were excited,” says Eric Mason, one of Afterglow Coffee Cooperative’s five founding members. “But you just never know until you actually see it.”

Afterglow Coffee’s wholesale side has only been up and running since September, and it’s soon-to-open retail and cafe branch is, well, soon to open. But the members of this worker-owned operation are deeply entrenched in Richmond’s food and bev industry.

“I’d been working for Lamplighter almost the entire time they’d been open, since 2010,” says Smith. Smith climbed the Lamplighter ladder, starting as a barista before moving onto roasting, eventually taking over the entire roasting operation and wholesale side of Lamplighter before buying in as an owner/operator.


There are no ladders at Afterglow, though. The horizontal business structure is designed with equity in mind. After a decade working at Lamplighter, “Covid happened,” says Smith. Like so many countless restaurants and coffee shops, Lamplighter had to close their Morris Street location.

“We didn’t know what would happen next, so I started talking to the other owners about cooperative ownership, thinking about more radical and equitable business models,” says Smith. “It seemed like a good time to try something different.”

Smith is not alone in this thinking. Katherine K. Chen and Victor Tan Chen, associate professor of sociology at VCU, write for Fortune: “Localities where alternative organizations prevail can adapt more nimbly and humanely to disasters and long-term challenges. When workers are included in decision-making, organizations benefit from their hands-on knowledge and ideas.”

This concept doesn’t just gel in theory, either: a Rutgers 2020 study found that, “Majority employee-owned companies with Employee Stock Ownership Plans are outperforming non-employee owned companies during the COVID-19 pandemic in the areas of job retention, pay, benefits, and workplace health safety.”

While they don’t have previous co-op experience, Smith says he and the Afterglow members were all ready to commit to this business structure.

“Most people I know are fed up with some aspect of work,” says Smith. “Whether it’s their particular job or that the work life balance is off, you have to work a lot of the time just to pay for mortgage, to pay for rent. We thought we could forge a path more possible for more of us.”

The team has looked to other employee-owned businesses: one in Baltimore, one in Asheville, as examples for how to try and craft their own operations. The founding members all have niches they easily fill, from administrative acumen to roasting expertise.

“I think [the business model] fosters cooperation because there is no reason to undermine anyone,” says Smith. “There is no real competition, we’re all working toward the same goal and for a small business that doesn’t need that much labor, you’re saving yourself in the long run.”

Smith notes that each member joined the co-op with a base level buy-in, “to get things off the ground,” though what that buy-in will look like for future members/owners remains to be seen. “We want people to be able to join even if they don’t have cash up front.” 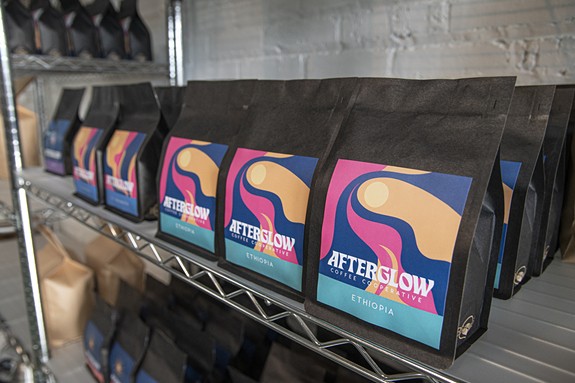 Smith says interested parties without capital can contribute sweat equity for a certain number of months, for example, before becoming a fully invested partner. All owners, once fully invested, receive profit shares plus a salary -the same as all the other members.

“We will definitely need to grow our worker owners when the cafe opens,” says Smith. As for the timeline on that cafe opening, he says they’re trying to launch “as soon as physically possible.”

For now, Afterglow is hosting its back alley pop-up the next two weekends (January 21/22 and 28/29) from 8 a.m.-2 p.m. at 1719 Summit Ave. They have a smattering of standard espresso-based offerings, plus batch brew, pour over and cold brew drinks. You can also snag a Back Alley Bakes cinnamon twirl and bag of beans while you’re there.

Smith and the experienced Afterglow team take turns behind the makeshift bar during these pop-ups, greeting old friends and explaining the story behind blends, like their new El Salvador Finca Las Duanas beans, available by the bag or as a pour-over.

It’s getting to investigate and experiment with direct trade, award-winning coffee like this that really lights up Smith.

“When you work for someone else you have a limit to creativity—even in a permissive environment, there’s a limit,” he says. “The open door to do whatever we want, to see what the response is, what our community likes and what makes sense for people coming in, it’s just really exciting.”

Follow along on Instagram,@afterglow_coffee ,for news on the cafe’s opening date and head to their site to order some beans and merch while you wait.

Shooting at Chesterfield party kills one, another person being treated at hospital

US Under More Tyranny Now Than in 1776, Says Historian