Press play at the start of the “20 Years of Cherub Records” compilation album, and you’ll find yourself enveloped in mystery.

The opening track, like the first official release in Cherub’s catalogue, comes courtesy of Kids Techno, an artist whose identity has been cloaked in secrecy since the Richmond-based label’s 2001 founding. It’s a fitting tone-setter for an imprint whose tagline currently reads, “Celebrating 20 years of being obscure.”

True to that history, founder PJ Sykes is commemorating this moment by offering up a 30-song deep-dive into the multifarious and sometimes-murky musical universe he’s curated, ranging from sub-two-minute punk blasts to discursive improvisation and so much in between. Demos, live recordings, unreleased material… he’s got it all.

“He’s kept everything,” says Timothy Bailey, who leads Timothy Bailey & The Humans and has two tracks on the 20th anniversary album. “That takes a fair amount of consideration to do.”

Sykes has long been a keeper of details and the archiving bug bit early. He didn’t just collect baseball cards, he studied them. He didn’t just play with his Star Wars toys, he photographed them. More recently, in 2021, he landed a position with the Richmond Ballet that involves producing, archiving and restoring video content.

“It all comes back to telling the story,” Sykes says of his passion for documentation. “What’s life like in Richmond in [the year] 2000-whatever? Guess what – I have some of that information that nobody else thought to keep up with.”


While Sykes is known to many as a concert photographer, having taken well-circulated shots of Foo Fighters and several other rock bands, he’s established himself as a versatile mainstay of Richmond’s music scene with a comprehensive do-it-yourself skill set.

“I started figuring it all out because no one wanted to play with me,” Sykes remembers. “It all comes from that thing where if someone says no to you, you’re like, ‘Okay, watch this.’”

Sykes grew up in Lynchburg, “a weird kid [in] a growing religious town” he says, recording with whatever gear was available and renting sound equipment to host shows at ad hoc venues. Despite the lack of a thriving scene, Sykes found mentorship in the form of fellow Lynchburg local Jeff Roop, who was in college when he auditioned a high-school-aged Sykes to play guitar in a theater production.

Sykes and Roop played together full-time in alternative rock band, Angels VS Aliens, ahead of Sykes’ 2002 relocation to Richmond. Sykes credits Roop with the inspiration to start a label, and there’s a sense of torch-passing in that PJ distributed the first handmade Kids Techno singles at the last Angels VS Aliens show. Nevertheless, Roop says Sykes is the inspiring one: “The thing that I’ve admired the most about PJ is that he’s never been afraid to take a risk … He shares that enthusiasm with whoever works with him.” 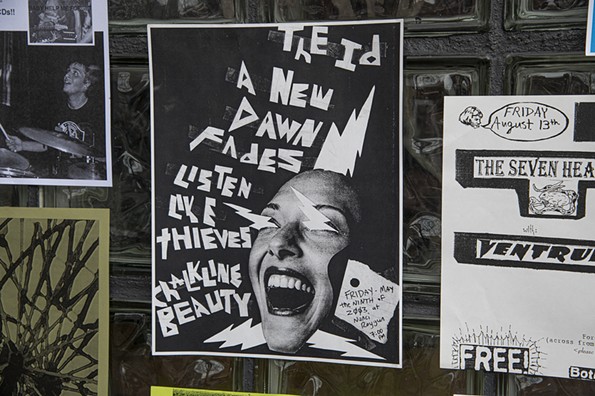 For Timothy Bailey, that enthusiasm fueled a resurrection. Bailey and Sykes met in the mid-2000s as employees at the Hueguenot Road Barnes & Noble. Bailey was just starting to emerge from an extended musical hiatus, having reached the point of burnout pursuing a career with the 1990s Richmond band, Schwa.

“He was just so authentically and generously encouraging,” Bailey remembers of Sykes’ reaction to the songs he’d been working on. “It gave me the wherewithal to try to make music again.” A Cherub-released Timothy Bailey and the Humans album called “Ecoutez! Ecoutez!” followed in 2006.

Projects of PJ’s appear throughout “20 Years of Cherub Records,” including the panoramic rock of A New Dawn Fades, the punk rock of Hoax Hunters, and a pair of tracks under his own name. His 2021 album “Fuzz” was his first eponymous one since 1998, and it was written and recorded almost entirely solo during the height of the COVID-19 lockdown. Despite a blanketing of crunchy guitars, “FUZZ” is Sykes’ most transparent work to date. “If you put your name on it, there’s no denying that’s what it is,” he says. “Now you have to own it.”

So much of the material on “20 Years of Cherub Records” goes in the opposite direction, delighting in obfuscation. You could write a senior thesis on the recording of hyper-prolific songwriter Matt Farley titled “Introducing Jandek’s Ready For The House Band” and still not get to the bottom of it. And we may never know who Kids Techno is.

To learn more about Cherub records, check out their website.

Luca the dog nearly ready for a new forever home

Power outages persist in Virginia’s rural counties, could last until next week

Scientists Told Us NOT to LOCKDOWN, And Yet…